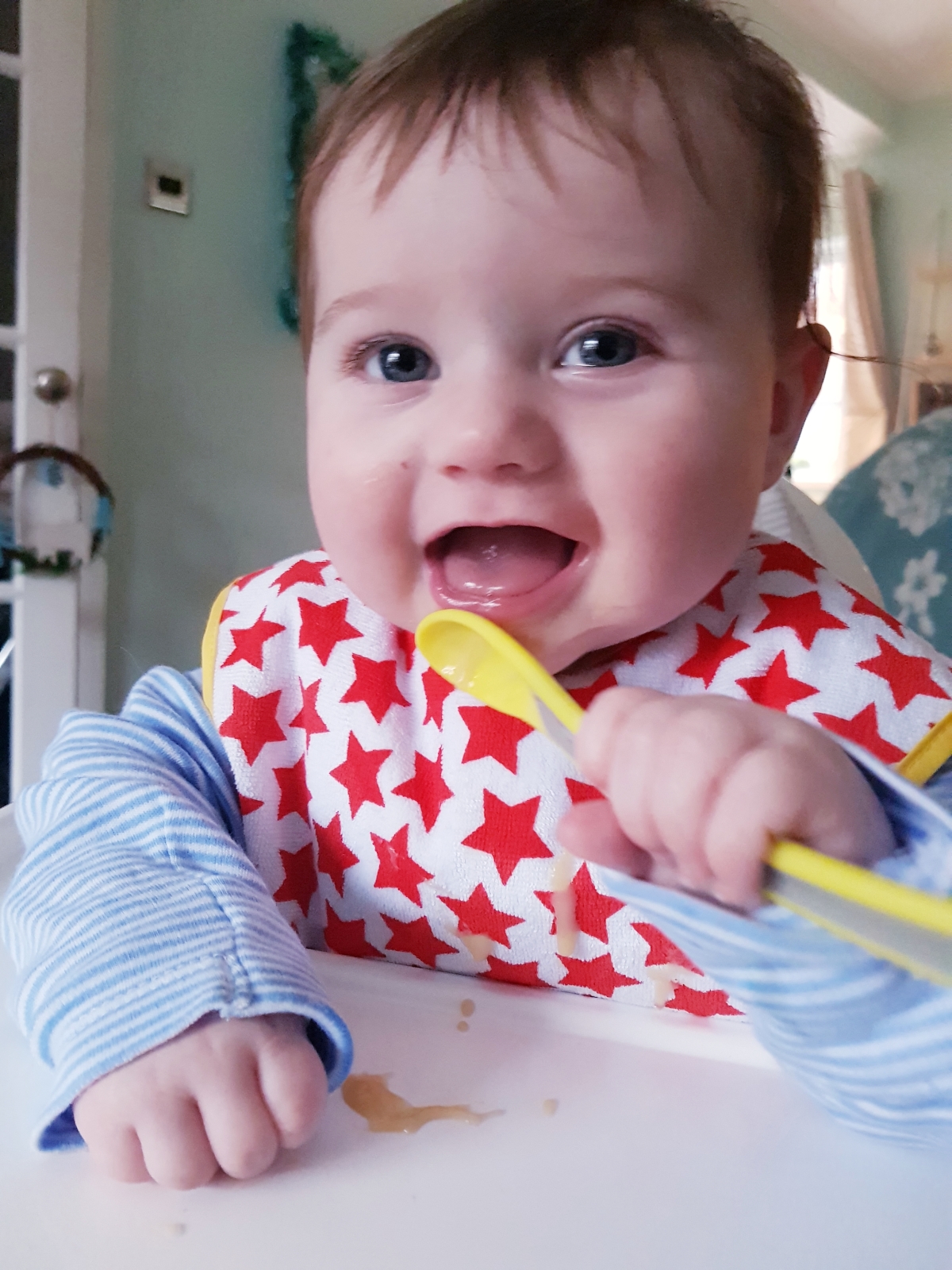 The time has come, what I’ve been sort of dreading for months… feeding my baby actual food. After months of figuring out teats and bottles and formula, you have another minefield to deal with. I looked upon this stage with some apprehension. But, now I’ve relaxed a little into motherhood, I’m seeing it as the next adventure. There are many, many books about weaning (I’ve bought or been given plenty), but they’re doing nothing other than gathering dust on the book shelf. I’m a very last minute kind of girl by nature, so I’ve not yet even opened them, opting to ‘wing it’. I’ve also purchased a Tommee Tippee Baby Food Blender which is still in its box. I really am an advertiser’s dream. Thank god for Ella’s Kitchen. My larder is now full of brightly coloured foil pouches. I consider this is a bit lazy, not to mention expensive but, you could say, I’m easing myself into this new phase.

Sonny adores his new high chair, and enjoys thumping the tray energetically as if to say, “I want fed noooow mum!”. The first day of him trying puree went pretty well. I situated him in the kitchen, where I thought it would be easier to clean. Sadly, it’s not fancy enough to have a breakfast bar or big enough for a dining table and chairs so it meant me standing while I tried to eat and feed him too. Eventually, I brought him into the living room. We have wood floors so I thought “What the heck, it can be wiped”. He tucked into his apple and banana puree with gusto. He only had a few spoonfuls but he definitely enjoyed this new experience, as did I! I gave him his preloaded spoon, which he whacked against his face and squealed, before flinging it across the room. Fair enough Sonny. You’re new to this. Hell, so am I.

I’m by no means a tidy person, I just like things the way I like them. I love picture frames, candles, cushions and throws. Anything that makes a place look homely. I nearly lost my shit when my dear husband washed my prized Biba faux fur throw at 50 degrees, blaming it for making him itchy. This is why I do the laundry, because he never reads the effing washing instructions. After sulking for a few hours, I had to just let it go, there are too many other things of importance to think about. All material things are replaceable. Now we have a baby, our small but lovely home is going to be messy. I need to accept that. When we win the lotto, we’ll hire a full-time cleaner.

In other news, I was taking Rex to the vet earlier this week. The cat was literally out of the bag mid-transit (I had him in his carrier underneath the pram). What ensued was stressful but hilarious for onlookers. I was even thinking, “wouldn’t it be funny if the cat escaped?”, it really wasn’t.

It’s been a more dramatic week than I was hoping but such is life. And there’s no greater adventure than the highs and lows of motherhood.